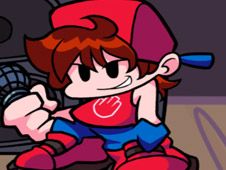 The creators of online FNF mods are really creative people, and we are always taken by surprise when it comes to the new and fresh ways that they make these Friday Night Funkin Games, just as they do today in our latest addition, a game called Friday Night Funkin Sibling Edition.

In it, Boyfriend has red hair, and an outfit similar to Girlfriend's, and that is because in this game he is not her boyfriend, but he has been transformed into her twin brother, who will now fight antagonists in musical battles to protect her, with your help, of course!

You can play this game in either the story mode or the free play mode, and you should pick a level of difficulty that fits with how many times before you've played games in this category.

To win the rhythm battles you need to reach the end of the songs and turn the progress bar to your advantage, doing so by playing the notes and singing at the right time.

When arrow symbols on the screen match one another, press the same arrows on your keyboard to hit the notes at the exact same time, but be careful not to press them at the wrong times, or you lose the game.