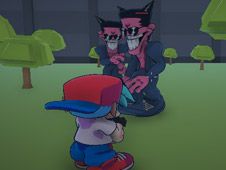 What is Friday Night Funkin FPS?

It was only a matter of time before the Friday Night Funkin Games series on our website would diverge from the format that you were used to in it, and would offer you something new for a change, which is definitely the case right now and here, when we're offering you one of the first-ever FNF shooting games online, where, instead of using music and rhythm, Boyfriend will use guns to defeat the antagonists, something that you help him out in this action-heavy 3d game that is a must-play for everyone!

Learn how to shoot the FNF characters:

The first thing you need to learn is how to control your character, something that we teach you right now. Use the W, A, S, D keys to walk around, left mouse button to shoot, right mouse button to aim, and with the mouse wheel, you change between weapons. Use R to reload ammunition, press G to throw grenades, F to pick up items. With left shift you run, crouch with left CTRL, spacebar to jump, X to prone, and V for melee attacks.

In this 3d game, the levels are called weeks, just like the musical battles in the original, but what you do is go around each map, where you have to find the antagonist for that week, such as Daddy Dearest, Mummy Mearest, Senpai, Pico, and others, and you have to shoot them down when you meet them, and until you reach the big boss of each level, make sure to take out their lackeys first, and do your best not to get shot yourself.

Go around the map, use hiding spots when you are being under attack, and don't hesitate to pick up items, ammo, health packs, or new weapons, since they can all be used to take down your enemies and have a better performance.

Good luck in this action-packed adventure, and we're sure that if you give it your best, Boyfriend will shoot down all the enemies, and he and his Girlfriend will finally be together!