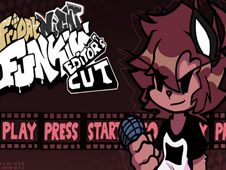 What is Friday Night Funkin’ vs Keko (Editor’s Cut)?

Keko is a character that looks like a mixture of several animals, and you now are invited to battle her in the world of FNF Games we've carefully created here for you since we're positive you are going to be having a great time doing so, especially with such a tracklist:

Let's have a musical showdown with Keko!

After making your choice between the story mode and free play mode, give your best to reach the end of the songs by playing all their notes according to the charts, which is how you achieve victory.

This means that when you see arrow symbols float and match above BF, that is when you need to press the identical arrow keys. Don't miss doing it too many times in a row, or you have to start again from scratch.

Good luck, enjoy, and have more fun here since we are always down to sharing even more amazing games with you all!