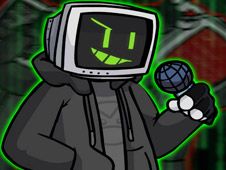 What is Friday Night Funkin VS Cyrix?

Some of the best new FNF mods online for mobile are always brought first here on Play-Games, where daily we are working very hard on our category of Friday Night Funkin' Games, which is the reason why right at this moment we are sharing with you the game called Friday Night Funkin VS Cyrix, which has new characters, new songs, and lots of fresh fun for you to have!

Cyrix is a music producer who has a television for a head, just like other characters in this series, who wears all black from head to toe, and has a pair of headphones over his head. He wants to make music with Boyfriend, so in this game, they are going to have a fun time funkin with one another, with Boyfriend singing on the cool beats he produced.

Learn how to play FNF Games:

This part of the article is for all of you who are here for the first time! To win the rounds you have to hit all the notes of the songs at their correct times, so you will press the arrow keys on the keyboard at the same time as you see them matching above Boyfriend's head, and know that if you miss too many of them in a row, you will have lost.