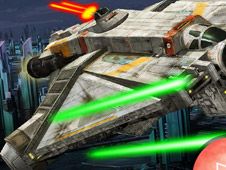 It's been quite a while since any new Star Wars Rebels Games online had been added onto our website, and it is precisely for that reason we are very excited to be sharing with you such a game right at this moment, a fantastic new game called Ghost Raid, which has action, adventure, space battles, and everything else you would want from our free games with Star Wars online!

Go on a space raid together with the Rebels crew, and defeat the Empire!

Start by choosing a level of difficulty you think suits you best, from novice and heroic, and we definitely recommend the easier one if you've not played this game before! As the pilot of the Ghost spaceship, Hero, you have to navigate the ship through space and reach the Imperial supply ships, because if you take down their supplies, you will be closer to victory against their evil empire.

Along the way, you will fight off against TIE fighters and other defense forces, which will try to defend your target. You can use either the mouse or the spacebar to engage the ship's cannon and fire away blasters at the enemies. Along the way, try also to collect imperial credits to get lots of points and money in return, and if you also see power-ups, make sure to grab them at any cost, they will be very helpful!

Start off with the level around the planet Ryloth, and then proceed to the other courses, with our team wishing you good luck for the entirety of the game!

Use the spacebar or the mouse.