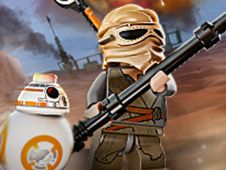 What is Empire Vs Rebels?

It is already know how much kids from all over the world love to play Lego Stars Wars Games online, so we can imagine how happy they are going to be when they see the latest such game that has been added on our website, a game called Empire Vs Rebels, based on 2017's The Force Awakens movie, where the two factions of imperial forces and rebel forces will collide, and you take part in this awesome battle!

Help the Rebels defeat the evil Empire, once again!

First, learn how to control your Jedi warrior. You will use the right and left arrow keys for moving, with the up arrow you jump, and you press the spacebar to attack with your sword. Throw bombs to wreck walls and open paths by pressing the G key.

Now, you will go through different courses ruled by the Empire, where you have to do your best to defeat all the Empire soldiers you encounter along the way, collect Lego bricks, and reach the end of each level, simple as that.

There will be bosses at the end of each level, of course, so make sure to defeat them, since you will deal a big blow to the Empire's forces. Good luck, let the fun begin, and stick around for all the more fun that still awaits you!

Use the arrow keys for moving and jumping, space to attack, G to throw bombs.