Star Wars Rogue One: Boots on the Ground 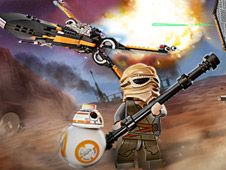 What is Star Wars LEGO?

Star Wars Games get only better when they are LEGO at the same time, which is what we invite you to experience right now on our website and have tons of fun, with this game being based around the new trilogy of movies, as you can see from the inclusion of BB-8, one of the most beloved droids in the world.

Play LEGO Star Wars and have the best adventure!

You will use the right and left arrow keys to move, the up one to jump, the spacebar to attack with your lightsaber, and with the G key, you can throw grenades. You will control Rey first on Jakku, but then you can visit other planets too, with the game having a platform-adventure format with action.

That means you have to go around, jump on platforms, blow up doors, push bricks to jump on them, or press buttons to open doors, and a collection element is also in this game, as you need to grab the Lego Bricks to uncover clues about the whereabouts of Luke Skywalker, who has been missing, but the rebellion needs him.

Attack all the enemies you encounter to reduce the forces of the evil Empire. Good luck, we wish you the best, and we hope you don't stop at this game, since plenty more amazing ones are still on their way for you right now!

Use the arrows, spacebar, G key.