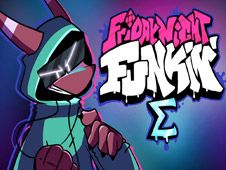 What is Friday Night Funkin vs Demetrios?

The Friday Night Funkin' Games category of our website kept on producing some of the coolest new antagonists day after day, all with interesting designs that we're sure you will love to play against, and that is true once more right now when our team invites you all to check out the game called Friday Night Funkin vs Demetrios!

Who is Demetrios from FNF?

This character's body might be humanoid, but he is red-skinned, has long stripped ears, and wears red sneakers, green pants, and a long green cloak that hides his body. You can also see him having some cool shades over his eyes, which hides the fact that he actually has four eyes, two on top of two other ones. Prelude, Nova, and Quasar are the three custom songs that you have to help Boyfriend defeat him on!

How to win this rhythm game from FNF?

Well, winning the battles means you have gotten to the end of each song and turned the progress bar green, and, hopefully, you've not missed too many notes of the song in a row, because if that happens you lose and have to start all over again. When you see arrows matching over BF, press the same arrows on your keyboard, not one moment sooner or later, it's that simple!