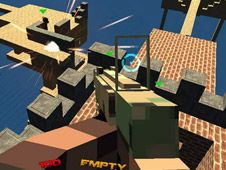 What is Pixel Warfare 5?

We know how much people love playing multiplayer shooting games online, and they should, because they are really awesome and fun, but they tend to be even better when they are also Minecraft Games at the same time, and the world around them is a pixelated and blocky one, which is the awesome experience you're about to have right now with the game called Pixel Warfare 5!

Pixel Warfare 5: a Minecraft shooting game with players from all over the world!

You are going to be thrown from the sky in a pixel world, similar to how battle royale games work, and in this world, all the other blocky players are going to be your enemies, so shoot them down and kill them before they do the same to you, since they will try it!

You start off empty-handed which is why you have to explore the map and find some weapons to use, mostly guns, but also bazookas, melee weapons too, grenades, and plenty more.

You will move using the W, A, S, D keys, jump by pressing the spacebar, use the shift key to sprint, and with the mouse you aim and shoot your guns!

Enter the room of your liking, or create a brand new one yourself, and then start giving this game your best, and have fun like it is possible to have only here!