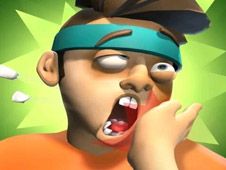 What is Slap Champ?

Slapping contests are getting more and more traction both in the real world and that of online gaming, which is why our team is very excited that right at this moment we could share with you the new and awesome game called Slap Champ, a slapping game online in 3d unlike anything you've played here before, so missing out on this game should be out of the question!

In this game, you are taking part in a slapping contest against the computer, where you and it go in turns slapping one another, with the goal being to slap the opponent with a lot of force so that you can deplete their health bar completely before they can do the same to you first because you then lose.

It's an action and skill game that is simple, the characters are rendered in 3d, and we're sure that you will enjoy it greatly from start to finish, just like we've done, or otherwise we would not have shared it with you!