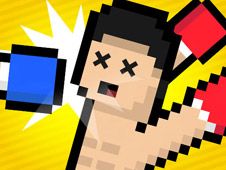 What is Boxing Random?

Boxing has once more become one of the most popular sports in the entire world, mainly because of the many high-profile matches featuring various stars going up against professional fighters, so it was only natural that boxing games online would also catch a boost thanks to that, just like it is happening right at this moment when our administrative team is excited to share with everyone here the 2 player boxing game online called Boxing Random!

Box against a friend in a funny and fun way!

Start off by picking between the 1P and 2P mode, but you know that we recommend the one with two players, especially if you have someone close to you to play with, so invite them over for fun! Each of you controls a stickman-like boxer avatar, one with red gloves, the other one with blue gloves, and to jump around in the ring and throw punches you use the W key and the Up arrow key.

The boxers are going to jump around the ring, and if you can move them so that they hit the other one and deal a K.O, you are going to become the winner. The game has the word 'random' in its title, and that is because random things can happen, making it even more fun. You can suddenly start boxing in the snow, or, jump around faster, or get the ability to throw rocket punches.

Try to win more matches than the other player, simple as that! Good luck to both of you, and we really hope to see you around some more!

Use the Up arrow and W key.