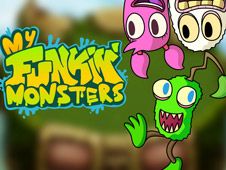 What is My Funkin’ MSM Monsters?

On Play-Games we make sure that as soon as there are new FNF mods online we can offer you here for free, we do it as quickly as possible, and this is what will be happening right at this moment when our team is excited to share with everyone here a tremendous new game called My Funkin’ MSM Monsters!

Help BF keep the rhythm with the Musical Monsters!

Firstly, know that this mod is an homage to the 2012 musical game called My Musical Monsters, because the monsters that Boyfriend will face off against in this game are from there, and they are called Furcorn, Mammott, and Pom Pom, in their respective islands of Plant, Cold, and Air.

Why do this? Because Boyfriend and Girlfriend entered through a portal into the world of these musical monsters, and only if they sing the songs together correctly will they summon the portal that will be able to take them back, and you want that to happen, no?

Well, then, make sure you are focused, and you press the arrow keys at the same time as the arrow symbols match above BF, making sure to hit all the notes of the song at the right times.

If you don't, and you have too many misses in a row, you lose and have to start all over again, so we really hope you are not going to let that happen! Good luck!

Battle it out on the songs called Air Tight Orchestra, Cold Melody, and Plant Symphony.