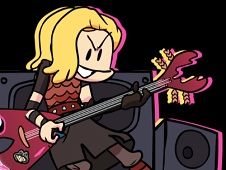 What is FNF vs Sasha?

FNF vs Sasha is the newest Friday Night Funkin Mod, in which you will have to prove to us all that he is able to fight in a rap war against a professional, Sasha, who is a musician by profession, oriented towards the rock genre, as it can also be seen in the images of the game. Before starting the battle, you will have to have a dialogue with your future opponent, from which you will learn that this antagonist is one of the worst, with crazy revenge, which is why we advise you to be very careful with how you dance in this new mod.

-Where the hack is your dad?

-He told me to meet here like an hour and a half ago.

-Iten he does some dramatic entrance to make up for...

-your dad turned into a girl.

-Boyfriend shat up, whati a minute!

-You know this girl?

-I used to babysit for extra money.

-So you need to take yourself and those chunky little speakers off the stage.

-You hold up! I've been waiting for hours to song battle, I'm not just gonna

-C'mon Sash, the little guy can't sleep right if he ain't got at least one song battle in for the day.

Who is Sasha from FNF?

This new character is a musician known in the world he comes from, he plays for a rock band, and this time he is in front of you, against BF who has a rather complicated mission, namely to invent him in rap rhythms on this new character. The physical appearance of this character is quite colorful, being dressed in a homemade costume, specially made for the shows he participates in, his hair is blond, quite long, and in his hand, he has a rock guitar that he will use in the new mission he has.

In this new mod you will have to dance on the following songs: