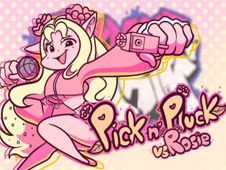 What is Friday Night Funkin’ vs Rosie?

Rosie might seem like one of the cutest antagonists that BF has faced off so far, but beware, because she is the leader of an elf gang, and don't be fooled by the pink color of her gun, since it's quite dangerous. Of course, there is nothing more dangerous than her rhythm and musical abilities, which she will try to use to defeat Boyfriend, but, if you play this game, you are here to help our protagonist win instead!

The songs you compete against this blonde-haired elf are called:

The gameplay mechanics of FNF Games:

To win each of the musical battles you take part in, you have to turn the progress bar in your favor by the end of the songs, and to do that you need to have a great rhythm and play the notes of the songs at their correct times in the charts.

To do so, when you see arrow symbols match above BF's head, that is when you press the same arrow keys on your keyboard, but make sure not to miss pressing them, because if that happens too much, you lose and have to start again.

Good luck we want to wish you all, and we hope you stick around for all the other amazing new games of the day still to come!