FNF: Sarv Behind The Slaughter 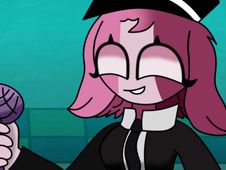 What is FNF: Sarv Behind The Slaughter?

Sarvente from the Mid-Fight Masses mod from Friday Night Funkin is definitely one of the most popular characters this series has brought about so far since she is a demon nun with a crazy personality, but in this newest game called FNF: Sarv Behind The Slaughter, she gets a brand new design, making her quite cute, and you get to face off against her in a brand new song called Living Tombstone.

Sarv and Boyfriend, a duet to remember!

The song they are dueling on is not as much about competition as it is about singing together as a duet, so you need to play the part of Boyfriend really well because only if you do will the song go well to the end of it, where if the progress bar is in your favor, you win!

When you see the arrows match above BF's head, press the same arrow keys on your keyboard to hit those notes, but be careful not to miss playing too many of the notes in a row, because that happening means losing the game.

We wish you only good luck, and we hope to see you around, playing even more of our awesome new games of the day!