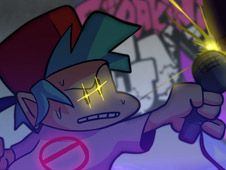 What is Friday Night Funkin vs Omega?

Omega is one of the most skilled assassins in the whole world, and of time as well, since he is an assassin that can travel through time, and he has now been contracted by Daddy Dearest to take out Boyfriend, so after BF and GF fell into a portal and ended up in a new time, there was nothing left to do than BF and Omega to battle it out in a rhythm duel!

This is one of the FNF mods of the highest quality we've ever had, with great animation, cutscenes, sprites, and it features no less than fifteen amazing original songs. Yes, because in addition to the twelve original songs, we've also got three custom ones for Omega Week:

You can choose to confront this character in either the story mode or the free play mode, it's up to you, and your goal remains the same, which is to reach the end of the songs and play the notes so well that the progress bar turns in your favor.

When arrow symbols match above BF, make sure to press the same arrow keys on the keyboard to hit those notes, but be careful not to miss too many times, or you lose the whole game. Good luck!