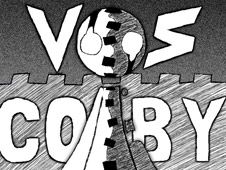 What is Friday Night Funkin vs Coby?

Coby and Corbin are actually one and the same since they are two inter-dimensional beings living in one body, which is why you can see that the two halves of their body look a bit different, and they are the new antagonist you are facing off against in this awesome new FNF game!

Only by defeating this being can Boyfriend return back to his reality to be with Girlfriend, so defeat the antagonist on the following songs:

Defeat Cody and help Boyfriend get back to his universe!

In either the story mode or free play mode, you've won at the moment when the progress bar has turned in your favor, which happens when you have played the songs extremely well according to their charts, all the way to their conclusion.

Achieve that by having good timing and good focus, so that when arrow icons above BF are matching, you match them by pressing the same arrow key, and if you do that, you will succeed, but failing to press the keys too many times in a row will cause you your failure, that's for sure, so don't let it happen!