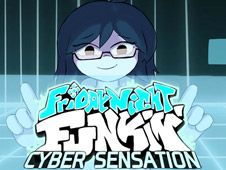 What is FNF vs Taeyai (Cyber Sensation)?

Taeyai is a mod creator that has now finally put herself into the game, which is why she is the newest antagonist that you have to defeat in the musical battle of rhythm, something that we invite you all to do right now by playing the FNF Cyber Sensation mod, a full week mod that has the following custom songs in it:

Use your natural music skills to defeat Taeyai!

It is your choice if you fight this character in the story mode or free play mode, but no matter the pick, give it your best to reach the end of the song by playing all the notes of the song according to the charts, something that you use the arrow keys for.

How? Well, simply press them at the same time as the arrow symbols above BF's head match one another, but be careful not to miss doing it too many times in a row, because if that happens, you will have lost. Enjoy!