FNF Meanhoven with My Little Pony 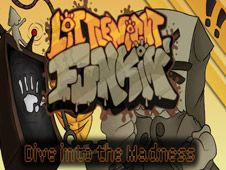 What is FNF with Little Nightmares?

Boyfriend has now entered the world of Little Nightmares, where, as you would expect, there are various creepy and scary antagonists that you have to defeat in a rhythm battle, something that we invite you all to do in this awesome mod that has a bunch of awesome songs waiting for you to enjoy them:

Use music to defeat all the nightmares!

The rhythm games of this series can be played in the story mode, where you have dialogues and cutscenes, or you can play it in the free play mode, where you pick any song you want to play on, and for the story one, there are also levels of difficulty to pick from.

Either way, watch for the arrow symbols that match above BF's head, and, when they do, press the same arrow keys on the keyboard, something that you have to keep doing until the end of the song to win.

You lose if you miss pressing the keys too many times in a row, so be careful not to allow that to happen. Good luck to you all, and we hope that you stick around for more fun to come!