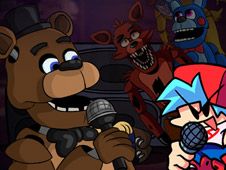 What is Friday Night Funkin at Freddys 2?

The animatronics from Five Nights at Freddy's are back to face off against Boyfriend in our category of Friday Night Funkin' Games, which we know is an instant classic crossover between the two popular internet video game series, and this is not the first time that they have come together, as you can tell from the game's title: Friday Night Funkin at Freddys 2. Let's get the fun going!

Boyfriend Vs Freddy Fazzbear and friends, a nightmare music battle!

This game will have a total of six weeks, and for each of them Boyfriend will fight off against a different demonic puppet and doll, with you having to do the same thing as you usually do in FNF Games, which is reaching the end of the songs by playing all their notes according to their chart.

This means that you have to press the arrow keys at the same time as the arrow symbols above the protagonist's head match one another, but know that if you miss doing it too many times in a row, you are going to lose and be forced to start it all over again from scratch.

We wish all of you playing this game good luck, and invite you to stick around to see all the other new and amazing games we have to offer you all here today, all for free!