FNF: Guns Song but Every Turn a Different Cover is Used 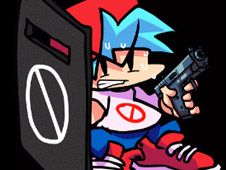 What is Friday Night Funkin with Guns?

The FNF Games category of our website is one where the battle is done using music and rhythm, not guns, but today there will be something different in store for you because Boyfriend and Daddy Dearest have grown to hate one another so much that in addition to having a rap battle, they will also have a shootout between them!

Boyfriend and Daddy Dearest got their guns, do you have the rhythm?

What makes this game different is that when you are playing the notes of the song correctly, you are also shooting at each other, but other than that, the mechanics are the same.

This means that when arrow symbols match above BF, you will have to press the same arrow keys to sing and shoot, but if you miss doing it too many times in a row, you will lose, so be focused not to let it happen. Good luck!

Are you a Wednesday Fan?
ADVERTISMENT