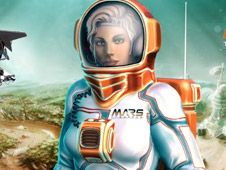 What is Mars Tomorrow?

The future is already here if you let it be, especially in the world of online gaming, where you can already colonize the planet of Mars, which is a long-lived dream of many people and scientists here on Earth. Some people believe that our planet's ecosystem is doomed, and one day in the far future, humans will be forced to move to other planets, and, so far, Mars is the best candidate, since it is the closest habitable planet to ours.

Can humans live on Mars?

Well, 'habitable' might be a bit of a stretch, because, at this moment, Mars is a red planet covered in sand, a desolate rock, but which is not too far from the Sun, and not too close to it either, so if humans were to go there and terraform the planet, they might make it their new home, which is why a subtitle of this game is 'Climate Change On The Red Planet'.

Become a pioneer of space travel and make Mars a better place for the humans of tomorrow!

The process of changing a planet's climate and environment is called 'terraforming', which comes from the concept of making other planets be like the Earth, and that is the only process that will allow for humans to have a place to live there a stable economy, a good habitat, and a chance for a better day.

You take the role of an explorer astronaut, together with other players from all over the world who also assume the same role, working together to plant soil, raise buildings from the ground up, you tend to the machines and vehicles on the planet, and maybe even plant vegetables and fruits, or farm animals, yes, in SPACE!

The change of the planet's climate will be done through eight stages, and the transport network you will build is going to work in real-time. Of course, there will also be plenty of vehicles and machines to use in moving around or doing the work you need.

This is a game with quite a big social aspect to it, as teamwork is at the core of succeeding in conquering a new planet because if you and the other players don't cooperate nicely, you won't get anything done, and the project might end up being a bust. Create a great community with the members of your guild, and through each challenge you face together, we are sure that you will grow stronger and advance through your space quest!