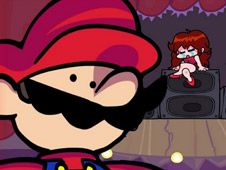 What is FNF vs Speedrunner Mario?

Speedrunner Mario is Boyfriend's newest FNF antagonist that you have to go up against together with the blue-haired protagonist, which is great, not only because this is a new version of the popular video game character, but this game also has plenty of awesome songs to go with it:

Show Mario who is the true musical speedrunner!

From the main menu you will have to make a choice between the story mode and free play mode, as well as a difficulty level, but no matter your options, the way to win is the same, which is by playing all your notes according to the charts, until you end the conclusion of the songs.

This means that when arrow symbols match above BF's head you will press the identical arrow keys, but be careful not to miss doing that multiple times in a row, since too many missed notes lead to you losing the game. Good luck and all the best we wish you all!