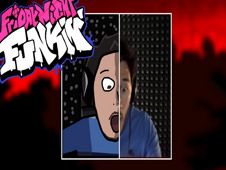 What is FNF vs Markiplier, Was That The Bite Of 87??

Markiplier is the newest YouTuber to have crossed over into the world of FNF, with this new mod inspired by a viral video of him reacting to FNAF 4 which is called 'Was That The Bite Of 87', with you having to win by matching his reactions to the video and recreating it in video game form, of course.

FNF with Markplier and the bite of 87, the best new FNF experience!

As the arrow symbols float and match at the top of the screen, watch for the moment when they do, and press the identical arrow keys at the same time. That is how you match the reactions and make them happen, and do that until the end of the video to win, but know that if you miss too many moments, you lose and have to start again. Good luck, enjoy!