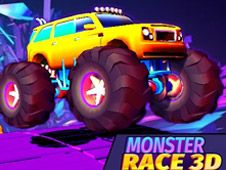 What is Monster Race 3D?

As soon as you start to play Monster Race 3D, you will see that this is one of the best monster truck games online to have been added to our website in a while, made even better by the fact that it's also one of our newest 2 player racing games, as it has always been more fun to race against real opponents than the computer.

Which player will win the Monster Race 3D?

Both players choose their monster truck out of the limited range of options, and they can pick to go up against one another in a whole championship, where you try to get a higher ranking than the other one, or simple one-off races in the arcade mode. You also have several tracks/maps you can race on:

One player uses the WASD keys to drive, the other one uses the Arrow keys, but both of you will have your own side of the screen to see where you're going. Cross the finish line to win the race, not only against the other real player but against the trucks driven as NPCs by the CPU as well.

Let all this fun begin right now and here, it's free of charge, and make sure to stick around for more to come, you're in for a treat!

Use the WASD keys, ARROW keys.