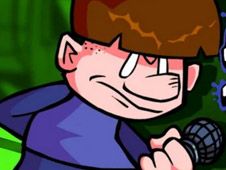 What is Friday Night Funkin’ vs. UberKids (UberPunk)?

Friday Night Funkin’ vs. UberKids (UberPunk) is the full mod featuring this new squad of dangerous kids, where both Boyfriend and Pico have to take them on, and, even better than that, you will do it on three songs, unlike just the one from the previous mod. The tracklist is the following:

Let's help BF and Pico from FNF take on the UberKids!

From the game's main menu you have to choose between the story mode and free play, but in either case, you win in the same way, which is by reaching the end of the songs, and that can only happen if you play all their notes according to the charts.

So, when arrow symbols match above your character, that is when you have to press the identical arrow keys. Don't miss hitting the keys too many times in a row, or you lose and have to start again from scratch. Enjoy!