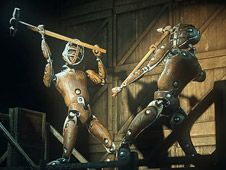 What is Striker Dummies?

Striker Dummies is going to take everything you know about 2 player fighting games and spin it into something new and fresh, as this is unlike most other games like that that you might have been used to playing on our website, which is precisely why we could not have missed sharing it with you all!

2 Players enter the arena of Striker Dummies, only one wins!

From the main menu, you have to choose between playing against another real player or a PC-controlled dummy, as well as a level of difficulty, and then you hit the play button to start. Both players will control a mechanical dummy doll holding a weapon, usually, one that is like a hammer, and the goal you have is to defeat the other dummy before the time of the fight ends.

Use the WASD keys and the ARROW keys to control the movements of the dummies, and figure out the best way to move in such a way that you attack and hit your opponent more, which is when you achieve victory. Good luck we wish you, both, and we hope that you continue to check our 2P games online, we always have the best of them in store for you!

Use the WASD keys, ARROW keys.