Spider-Man vs The Kingpin 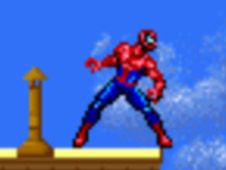 Spider-Man 2: The Video Game is now readily available to be played by kids and adults alike worldwide only on our website, it is free and unblocked and emulated directly from your browsers, so don't bother trying to find your old consoles or anything like that, you can be a superhero right now!

This is a game that recreates the story of Spider-Man 2 (the movie), where Peter Parker, played by Tobey McGuire, had to face off against Dr. Octopus, which is the villain alter-ego to one of his beloved teachers, Dr. Otto Octavius, who created mechanical claws controlled by AI mounted on his back.

Well, what happened is that those arms got their own ideas, and started controlling the doctor, making him a villain, so you and Spidey now have to defeat him, as well as some small-time crooks that the neighborhood-friendly Spider-Man always faces.

Jump from one building to another, shoot webs, and defeat enemies when you encounter them. The controls have been adapted for keyboards, and they are:

Good luck in your adventures as the world's most popular superhero from Marvel, and we hope that you visit his category further since it is filled with amazing games and adventures to be had!