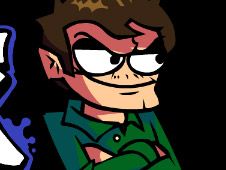 What is FNF: Well Well Well Everything is Eduardo?

Eduardo from Eddsworld is finally making his debut in the world of FNF Games online, with the mod entitled Well Well Well Everything is Eduardo, where 'ChallengEDD' is the song you face off against him on!

As the song progresses, watch for when arrow symbols float and match the protagonist's head, and that is when you need to press the identical arrow keys to hit your notes, and if you keep doing it until the conclusion, you win. If you miss hitting notes multiple times in a row, you lose and have to start again from scratch, so good luck and enjoy!