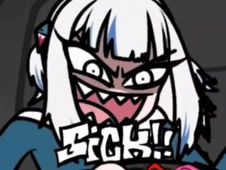 What is FNF VS Gura Challenge-EDD?

Gura, the shark girl Vtuber that is beloved by fans all over the world is now making her FNF debut, where you have to defeat her on the song called 'Challenge-Edd', all the while racing her on the track as well!

Watch for when arrow symbols match above BF's head, on the top right corner, and when they do, press the identical arrow keys to hit your notes. Do it until the song ends to win, but know that missing to hit the notes too many times in a row causes you to lose. Good luck, enjoy!