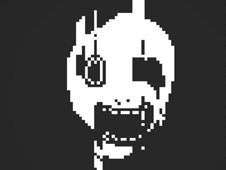 In the FNF FunkinScared mod that you're about to play right now on our website, you help BF face off against a scary character called White Face, whom you have to defeat on the song called 'deception'.

Get Funkin' Scared in FNF, but have fun simultaneously!

You need to reach the end of the song to win and to do it you need to be hitting your notes according to the charts until its conclusion. This means pressing arrow keys at the same time as the identical arrow symbols match above BF's head. If you miss hitting said notes multiple times in a row, you have to start again from scratch, so focus and win instead. Enjoy!