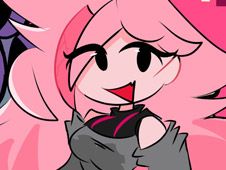 What is FNF Vs. Rayna?

Rayna is a new girl with pink hair originating from the world of FNF Games online, where right now we're positive you are going to have incredible amounts of fun going up against her, just like all of us did, especially since we have a full mod with LOTS of amazing songs:

Boyfriend Vs Rayna, a new FNF encounter of music!

Whether you're facing this new character in the story mode or free play mode, to defeat her you need to do the same thing, which, obviously, is to reach the end of the songs by hitting their notes according to the charts, without missing notes too many times in a row, because if that happens you end up losing.

So, when you see arrow symbols float and match above BF's head, that is when you press the identical arrow keys. It takes focus and dedication, just like with any musician, and we are sure you will have tons of fun!