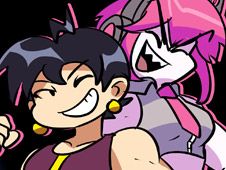 A rap battle and arm-wrestling contest are going to happen simultaneously right now in our new FNF Arms Race mode, where you can become either one of the two anime characters: Minji Kim or Mia Osuna.

Who will win FNF's Arm Race?

After choosing your character, lead them to victory by reaching the end of the song, something you can only do by hitting your notes according to the charts until then. This means pressing the arrow keys at the same time as the identical arrow symbols match above their head, getting both the key and timing right.

Don't miss multiple notes in a row, since that will turn the progress bar towards the enemy, and after too many mistakes you lose. Good luck and the best we wish you, hoping to see you play even more of our daily games!