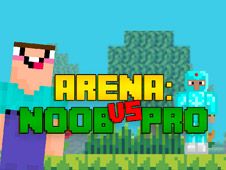 What is Arena: Noob vs Pro?

You are now invited into the Minecraft Arena of Noob VS Pro, which is a multiplayer fighting game online featuring these classic pixelated characters that so many of you have come to love and appreciate, and you should know that this game is a ranked one, meaning that you start off low, but if you give your best, we're sure you will become a top player!

Enter the Arena of Noob Vs Pro and defeat players worldwide!

In the main menu you're invited to choose your nickname, and with the money that you will earn from winning fights upgrade your character. Add points that you earn to the following Specifications:

In the Shop you can buy and open up treasure chests to see what comes out of them. You can also use your coins to buy new Skins for your Noob character, as well as buy him new Weapons to use.

Six Players enter the arena, three on each team, and they are put on the battlefield where you have to shoot down members of the other team, kill them all, and survive until the end to win.

Move using the WASD keys, and aim and shoot your guns using the mouse. That's the premise, these are the mechanics, and this is all the awesome fun we invite you to have right now, which we hope you don't miss out on for anything!

Use the WASD keys, mouse.