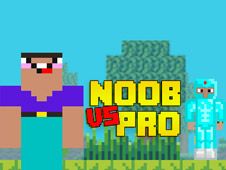 What is Noob vs Pro vs Hacker vs God 1?

In Noob vs Pro vs Hacker vs God 1, all the classes of Minecraft Games characters seem to be going out at one another, in a game unlike you've seen here before, made even better by the fact that it can also be enjoyed and played by 2 Players at the same time, in addition to enjoying the Campaign mode solo.

Have fun with Noob vs Pro vs Hacker vs God 1 online right now!

In the Campaign mode, you go on an adventure together with the two characters, with one of them being controlled by you, using the W, A, and D keys to move, and clicking to attack. Defeat the zombies along the way, tear down items to get food, and make sure to survive the whole route.

If you're playing 2P, then it is a war between the side on the left and that on the right, where you click or tap to send out soldiers from your base and make them attack enemy soldiers and the rival base, with the one that destroys the other one's base first becoming the winner of the duel.

Now that you have learned how simple and fun it all is, don't hold back, start playing and enjoying the game right away, and don't hesitate to share it with friends as well!