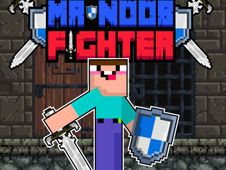 What is Mr Noob Fighter?

Mr Noob has to become a Fighter if he is to survive all the many dangers that exist in the pixelated world of Minecraft, such as Creepers or Zombies and many more, but he is not violent in nature, which is why right now he would need all your help to fight the enemies in his path, which is what we invite you to do in this 2D fighting game!

There are three keys you need to know, each one for a different action, with corresponding buttons for phones and tablets. They are A for attacking, S for moving, and D for defending yourself.

Keep jumping forward, avoiding dangers such as the spikes coming out of the floor, the floor tiles that fall down, and when you encounter enemies, defeat them in the battle to advance further.

Don't lose all your three lives and then the game. Use the coins you earn to buy new skins and weapons for your Noob character, making him stronger for further runs you will attempt with him.

Let's begin right now and here, where fun never stops, and don't hesitate to invite your friends along for more of our daily games as well!