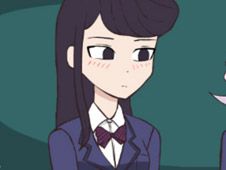 What is FNF Komi-san Can’t Sing?

FNF Komi-san Can’t Sing is a mod that crosses over with one of the most popular anime shows of the past few years, Komi-San Can't Communicate, and if she has problems talking with other people, you can imagine it applies even more so to singing, where together with an anime version of BF you will help her sing!

Komi-San Can't Sing, so help her with FNF's Boyfriend!

When the floating arrow symbols match above Boyfriend, who sits on the right, you need to press the identical arrow keys at the same time to hit your notes and keep at it until the song ends to win, getting Komi to join you, but make sure not to miss multiple notes in a row, that will lead to you losing and having to start again from scratch. Enjoy!