FNF Silent Note But It’s The Skies VS GF 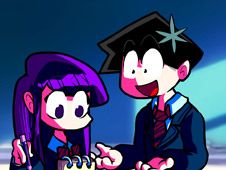 What is FNF vs Komi Can’t Communicate (Silent Note)?

Help BF, Najimi, and Tadano help Komi-San communicate in one of the newest FNF mods of our website called Silent Note, inspired by this highly-popular manga and anime, and if other mods featuring the characters had been received very well here, you can bet the same will now be true for these ones as well!

When the floating arrow symbols match above the character to the right, that is when you need to press the identical arrow keys to hit your notes, and doing it until the end means winning, but missing to hit notes too many times in a row leads to you losing, something you should not let happen, so focus and win instead!