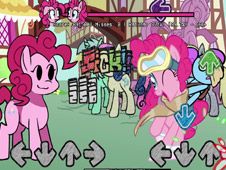 What is FNF vs Pinkie Pies Can Can?

Have a rhythm battle in FNF with two Pinkie Pie characters from My Little Pony, since two are definitely better than one, and do it on this brand new and exciting song called 'Infernal Galop'.

Carefully watch for when arrow symbols float and match above your character's head, and when they do, press the identical arrow keys to hit your notes, something you have to do until the song's conclusion to win. If you miss hitting notes too many times in a row, you lose the fight, so be careful and win instead. Good luck, enjoy!