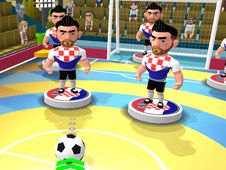 What is Stick Soccer 3D?

Stick Soccer 3D represents one of the most exciting new football games in 2 players on our website, where you will be playing soccer on a stick football table, one where the players appear as little statuettes, and you move them around to hit the ball and score goals, winning if you have more than your opponent, just like in the real-life sport!

In the regular modes, either 1 Player or 2 Players, score more goals than your opponent to win, doing it before the time of the match ends, with you picking the duration and stadium for yourself, as well as the teams. Players take turns in shooting the ball with their stick figures, so try shooting at the best angle to get the upper hand, or, foot, rather.

Both of you will use the mouse to aim and shoot the ball, dragging and then releasing the mouse when you have set your angle and power.

You can also participate in a Tournament mode, where you aim to win match after match to advance through the brackets and win the title cup, and in the Speed mode, you quickly get assigned a rival team controlled by the computer and have to win against it no matter the game's parameters.

The very best we wish you all, and we hope to see you stick around for all the other craziness coming here today for you!