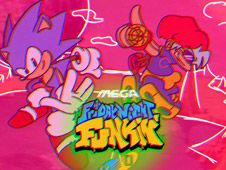 BF, GF, and multiple versions of Sonic will now be the characters that you help overcome the threat of Dr. Eggman in the world of FNF Games, as you're invited to beat him in the Mega CD Locked-on mod on the following songs:

Whether you will be playing in the story mode or free play mode, you need to reach the end of the songs by playing their notes according to the charts to win, without missing too many notes in a row, since that will lead to you losing and having to start again from scratch.

So, when floating arrow symbols match above the character, make sure to press the identical arrow keys. Pressing the wrong keys, getting the timing wrong, or not pressing keys at all means missing notes. Good luck, enjoy!