Fight-or-Flight but in 3rd-Person – FNF Mod 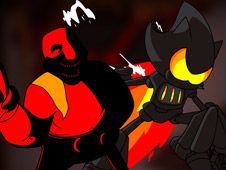 What is Fight-or-Flight but in 3rd-Person – FNF Mod?

The FNF mod of Fight-or-Flight has been re-envisioned in 3rd-Person, unlike the 1st-person view of the original game, featuring Sonic and friends going up against the evil Dr. Eggman on the following tracklist:

Try the new Fight-or-Flight but in 3rd-Person mod from FNF!

No matter the gameplay and view of the characters, help the character on the right reach the end of the songs by playing the notes according to the charts, something you do by pressing arrow keys at the same time as the identical arrow symbols match above them.

Know that if you miss doing it too many times in a row, you end up losing and having to start again from scratch, so focus hard not to let that happen but win instead. Good luck, enjoy!