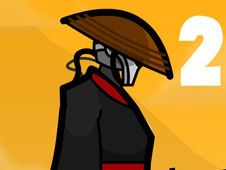 What is Straw Hat Samurai 2?

Straw Hat Samurai 2 is here only because we saw how much you really loved playing the first one, and since a sequel is now available, sharing it with you all was a no-brainer, as we know how much interest is there in action-adventure games in general, even more so those that take you back into Medieval Japan, where Samurai kept the law against the many rebels and bad figures that plagued the lands!

Once more, save the day as the Straw Hat Samurai!

As you travel through forests, cities, towns, wastelands, or other parts of the country, various enemies, also carrying swords, are going to be facing you from all directions, and you will use the mouse to slash them down with your sword, swiping in the direction you want to attack.

If you're playing on a mobile device, simply swipe with the finger in the desired direction of your attack. Now, depending on how you slash, to the right, left, up, or down, the sword will attack differently, so make sure that you combine them, since doing combos is going to help you gain even more points, and a better prestige and fame as a swordsman.

It is a straightforward sword battle game online whose rules and gameplay you have now been thought, so nothing should stop you from starting to play the game and have fun with it right now, you won't regret it!