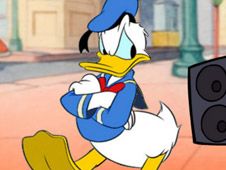 What is FNF Vs Donald Duck?

FNF's Boyfriend ended up in the world of Disney, where he met Donald Duck, and now they are going to have a rhythm battle against one another, with some surprise appearances from other characters, and they will do it on all the following tracks:

Make a choice between the story mode and free play mode, and then, in either case, give your best to reach the end of the songs by playing their notes according to the charts, which is how you win.

This means that when you see floating arrow symbols match above BF, to the right, you need to press the identical arrow keys to hit your notes. Missing too many notes in the charts means you will end up losing the battle. Enjoy!