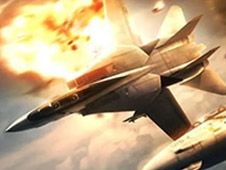 We would never miss a chance to share with you new airplane shooting games online such as Air Strike Warfare 2017, which might have been released a few years past since this point, but that does not matter at all, as it is still really enjoyable from the start to finish, as we're about to prove right now by describing what you do in it, so that you can fully enjoy it too!

To control your plane, move with WASD, K for brake, L for boost, space for the rocket, and shift to use the machine gun.

Follow the directions of the radar on the screen, which shows an arrow towards where you're supposed to go, so that you encounter enemy planes, shooting them down without letting them do the same first to you.

Also, avoid falling to the ground or into the ocean, you also die if that happens, obviously. The more enemy planes you take down, the bigger your score becomes, so aim for a top one!

Good luck, we wish you the best, and hope to see you around for even more fun to come, since new games are always being added here!