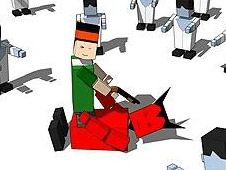 What is BoxHead More Rooms?

Welcome to BoxHead More Rooms, which gives you even more zombies to kill in one of the best retro shooting games online from the days of the old friv that our team is happy to have resurrected, pun intended, and since the previous one had been received extremely well, we're sure the same will now be true for its sequel!

Shoot more zombies, in More Rooms, as the one true BoxHead!

With your character, BoxHead, you have to go around the various rooms and kill the zombies there to survive. Use ARROWS to move, space to attack with weapons, and use the number keys from 0 to 9 to change weapons. If you do multiple kills, you can get up to ten weapons, as well as no less than 90 upgrades. The rooms featured in this new edition are:

Now that you've been put up to date, you know everything you need to enjoy this game a lot, so we hope you start playing it right now, as only here is possible!