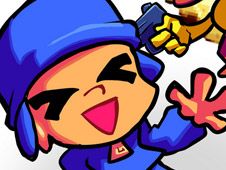 What is FNF vs Pocoyo?

FNF vs Pocoyo is an awesome new mod featuring these characters from the beloved children's series, where we are sure you are going to have an incredible time, even more so as it brings along two new tracks for you all:

Whether you're playing in the story mode or free play mode, you win in the same way only, by reaching the end of the songs by playing their notes according to the charts until then.

To do it, press the arrow keys at the same time as the identical arrow symbols match on the top right. If you miss multiple times in a row and your health bar depletes, you lose and have to start again from scratch. Enjoy!