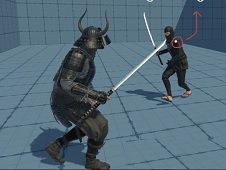 Kurofune Samurai is a sword-fighting video game that gives you a chance to become a fighter. It introduces you to a 3D environment where you can move freely using WASD keys. Your ultimate goal is to fight against culprits who are enslaving people. Enemies will appear on the spot as you move forward. So, here we suggest you avoid fighting against waves of enemies simultaneously. Fighting against one or two enemies may help you quickly defeat them.

Can you become the best Samurai ever?

It takes place in Shizukana, where people enjoyed a good life because the king who ruled the area acted justly. One day, a delegation was sent by the American Government to make a trade agreement, but the king refused. Furthermore, the Americans had equipped the king’s brother to overthrow his regime with the help of military weapons. Because of the regime change operation in Shizukana, the king’s brother became the ruler who started to enslave people. Soon, people ask an old Samurai to jump in and help restore their land's peace.
You can use the “Shift” key to jump, “Q” to Roll, and “E” to Block or Defense. Besides, you can use WASD keys to explore the area; however, the mouse left-click may help you perform a Primary Attach and the right key for the secondary attack. Using the mouse wheel may help you lock on your target.