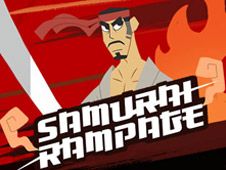 What is Samurai Rampage?

It's already a really good idea to be playing action-adventure games online for free on our website, but it's an even better one to play these games when they also have samurai in them, these legendary Japanese warriors armed with honor and katanas, which is the kind of character you will become right now with the awesome game known as Samurai Rampage!

Become a samurai on a rampage and survive all the enemies you encounter!

As the samurai runs forward by himself, demons will appear in front of him, and you have to tap on them to attack them with your sword, eliminating them, and getting points in return. Be careful how you do it, because some need multiple taps, for some, you have to wait for their defensive shields to disappear, and for some, you have to find their weak spots, shown by circles that you will tap on.

No matter the kind of demon you encounter, defeat them before the bar runs out next to them, or you get attacked instead and lose if you empty all your health bar. Some demons that you defeat leave valuable items behind for you to pick up and use, such as lives, the ability to deflect enemy attacks, or a shield.

We hope you do great, earn money, points, and eliminate the demon threat with your sword, as any honorable samurai would do!