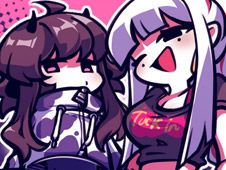 What is FNF Creamy Cherry Cava?

The Creamy Cherry Cava FNF mod we now present you features two friends drinking and singing together, something you will need to help them accomplish on a tracklist of three songs:

From the main menu you need to make your pick between playing in the story mode or free play mode, and then, after you do that, reach the end of the songs by playing their notes according to the charts to win.

To do it, press the arrow keys at the same time as the identical arrow symbols match above the character to the right. If you miss doing it too many times in a row and your health bar depletes, you lose and need to restart again from scratch. Enjoy!